This time we will discuss a brief biography of Prof. Dr. Kahruddin Yunus, an Indonesian Islamic Economics figures.. 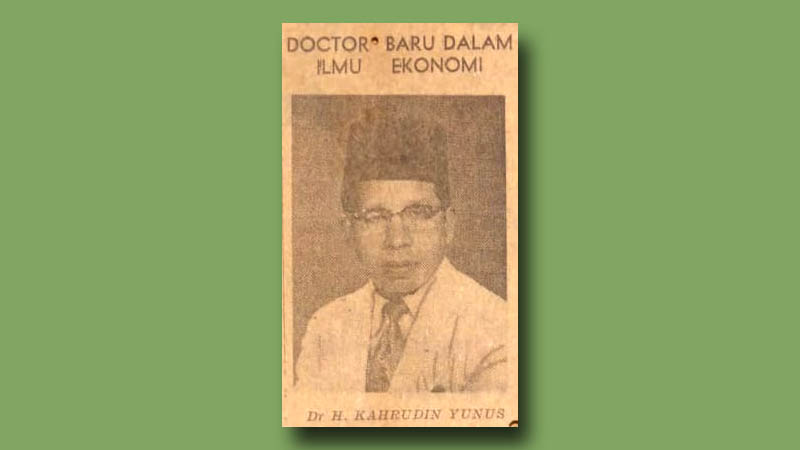 However, in this discussion we will not discuss it further. This time we will discuss a brief biography of Prof. Dr. Kahruddin Yunus, an Indonesian Islamic Economics figures who was well known in the Middle East during his time.

With an economic system based on culture, his monumental work entitled Sistem Ekonomi Kemakmuran Bersama (Bersamaisme) was born in 1955 and has a total of about 700 pages. It is enough of a reason for him not to use ideas offered by various mainstream economic systems, whether they come from the left, right, or center. In the beginning, this book was printed in Arabic and has spread to various countries in the world. He argues that Islamic economics must be built on the benefits of political economy to build a democratic system.

The Biography of Kahrudin Yunus

During his studies in Egypt, Kahrudin Yunus wrote extensively for the Harian Persamaan, Pandji Islam, and other Islamic magazines in the Middle East.

After arriving in Indonesia on October 6, 1954, he was appointed as a high official at the Ministry of PP & K (Teaching, Education, and Culture) and, besides that, he also became a lecturer at several universities in Indonesia, such as:

Besides being a lecturer, he also joined the Association for Islamic Economic Support (PPEI) as a temporary General Chair and was active in developing and deepening his opinions in various ways, especially towards PPEI members.

He is a prolific writer and quite brilliant. It’s just that, not much attention and review of his ideas, so it is almost unknown. Among the books he wrote:

Towards the end of his life, Kahrudin ever said to his son, Damai bin Kahar Pakieh Kumanggo, “In the Sulit Air, the tip of my fingernail is not appreciated, in Minangkabau, at least only the tip. In Indonesia, only my nails. But when I am in Arabia, I am welcomed more than a prime minister.”